Sounds of geese flying overhead is a sure sign of the approaching Fall season. It is a time when the geese start flocking up again after a Summer season of raising their young gosslings in smaller family groups.
As the geese start to come together in flocks to prepare for their Fall migration many properties can be visited by hundreds and sometimes thousands of geese at a time.  With each goose leaving 1 - 3 lbs. of poop everyday, many properties can become unusable after a few short days of geese on it.  Large open grassy areas, such as high school football fields, college athletic fields, parks, and school playgrounds can be a very attractive congregating place for these large flocks of geese.
In preparation for the long migration to warmer Southern climates, the geese are now practicing their famous 'V' formations.  Between mid-August and mid-September, you will see the flocks of geese start out with maybe two families merging together and have 6-12 geese to practice their flock flying skills.  The 'rookie' geese just hatched this Summer season are now learning how to fly with a flock in the formation.  It can be quite comical to watch them crash into each other while trying to figure out how to fly along with the others in the 'V' formation.  Some of the geese crash into each other so hard while flying, they drop down 10-20 feet in the air below the others. They just run into each other while flying and it is fun to watch them learn.
Besides practicing their 'V' formations, they are also practicing their take offs and landings as a group.  There is a lot of coordination they have to master before they join the much larger flocks of hundreds of geese. Many times, they are all landing into a pond, or taking off from a small area and they have to be coordinated and work together to be efficient.
So you may notice that the geese change their location more often that usual.  They may land in an area and stay only a short time, then leave, only to return a few hours later.  This is so they can continue to practice flying as a flock. You may also notice two small separate flocks of geese that land in an open area and start interacting with each other.
You could call this a draft pick!  These smaller flocks will continue to join other small flocks building their 'V' migration team. If you watch long enough, you will see them leave together as one larger combined group, or they may fly away separatly.
During these weeks, they are on the move quite a bit within an area. When they are landing and taking off from these large open grassy areas, they are also learning as a group where it is safe to land and where it is best to divert their flight to a safer area.
Placing a Dog Decoy or two in the area where these geese are stopping in for their flight practice sessions, will discourage them from landing there. The Dog Decoy just needs to be placed in an area where the flock of geese flying in will see the Dog Decoy moving.
You can then sit back and watch a flock of geese attempt to fly in and land, see the Dog Decoy moving around in the wind, and the flock will change their direction and look for a safer place to land.
The fewer Dog Decoys used will be more effective.  Just make sure you have a Dog Decoy in an place where the geese will see it as they fly into the area. It is the movement of the Dog Decoy that catches the attention and alerts them that it is unsafe to land there.
Geese don't understand property lines, so you want to make sure you are looking at the area from a goose perspective and put a Dog Decoy in every area they may deem 'safe' to land.  Ideally, they don't land anywhere near your property, and keep flying.
The Dog Decoys are available for purchase at DogDecoys.com. 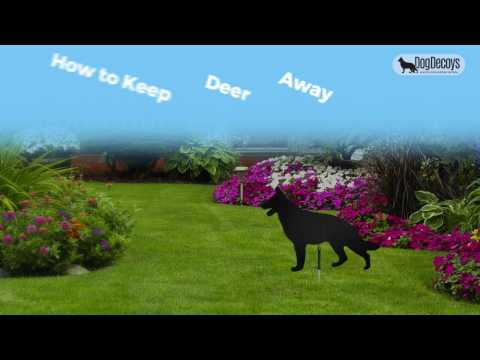 HOW TO PROTECT SOD AND SEED FROM WILDLIFE